Someone wanted to trade me this, in exchange for a nice guitar I had $30 into. 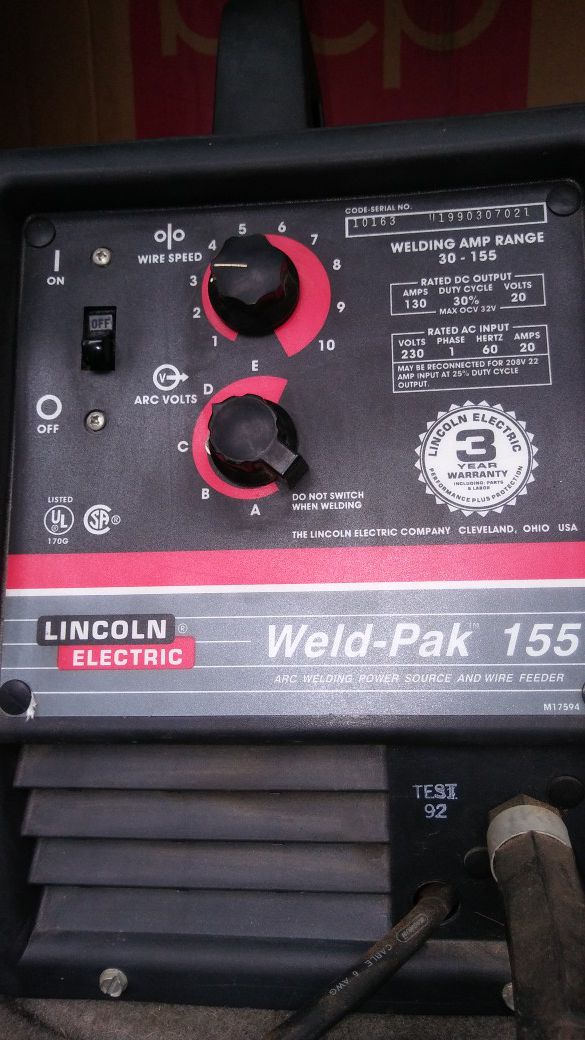 (better yet) "What are you gonna do with a broken welder?"  🙁

It came home with me, free.

I didn't have the right receptacle, the board is SMD (work of the Devil) and  I ALMOST threw it out (minus salvagables) but couldn't bring myself to.

Next to the Lincoln Tombstone it sat, we ALL have better stuff to do than swap cords on a broken welder.

Someday.... those SOMEDAY projects... and one day that red box started calling my name. "John, it's probably and easy fix!" it would say.

"NO! I have actual work to do!" I'd think "No ADD-wannabee-welder-technician for me today!"

Then, one day, last week, I slipped.

I got weak, and the siren song reeled me in, "Probably an EAaaaaaasy fix Baaaabbbby... yeah...."

IMHO 90%+ of SMD is pure rubbish, get a new board or replace the item. 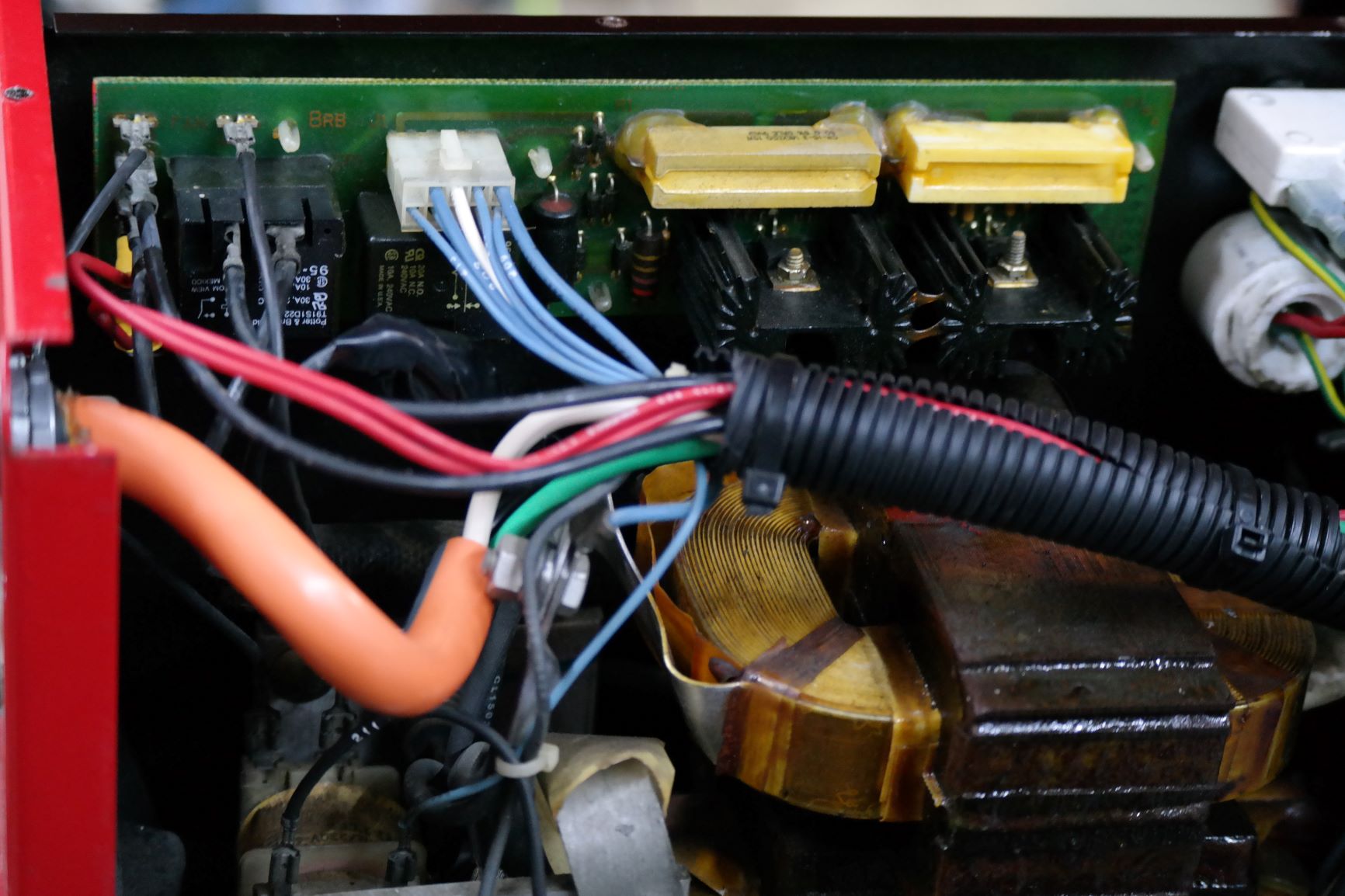 But I poked around, again, and came back to the same relay for the wire feed motor, no clicky.

Mini ice-cube smd junk,  but I had a bad idea 🙂

We've all beat on a stater motor when the solenoid failed, well, MOSTLY failed. Unless you hit it with a hammer;-)

3-4 clicks and FIXED!  Relay un-stuck and all works as it should!

I ran through 1Lb of flux core to ensure function, then bought the stuff to convert.

Tombstone went down the road for $200, easy sell with a dryer plug on it LOL!!!

For a free welder... 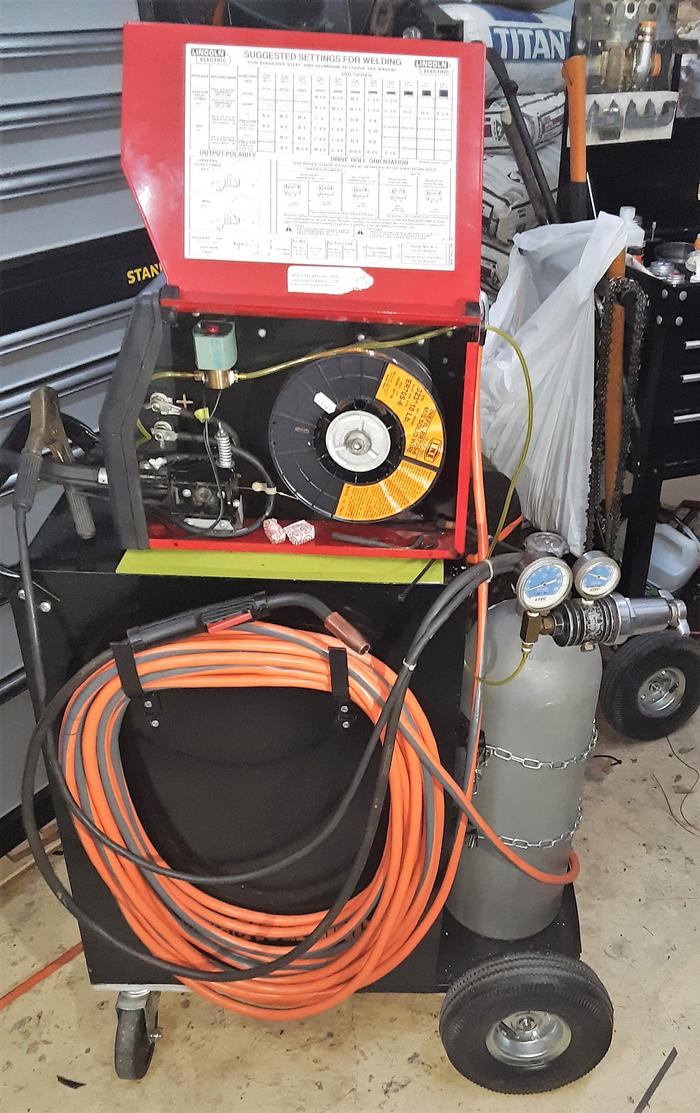 While wasting all that hated flux core, I was practicing (and wasting stock)

Besides simply wasting wire (and stock), I managed to cut apart (gut) and butt weld together a .030-ish chainsaw muffler.

23ga? Heck I poked a stick through the car fender once  while messing with the helmet!  .030 is a BIG improvement!

But flux core is so ugly, the splatter is enough to turn me OFF welding.

After the saw muffler I feel confident enough to weld tubing, starting with a cage to protect regulators on this oxy/acet rig. I'm scared of that stuff, boom!

Hand truck is HF $40 with coupon, but positively worthless due to rearward axle offset. Almost perfect for bottles though! 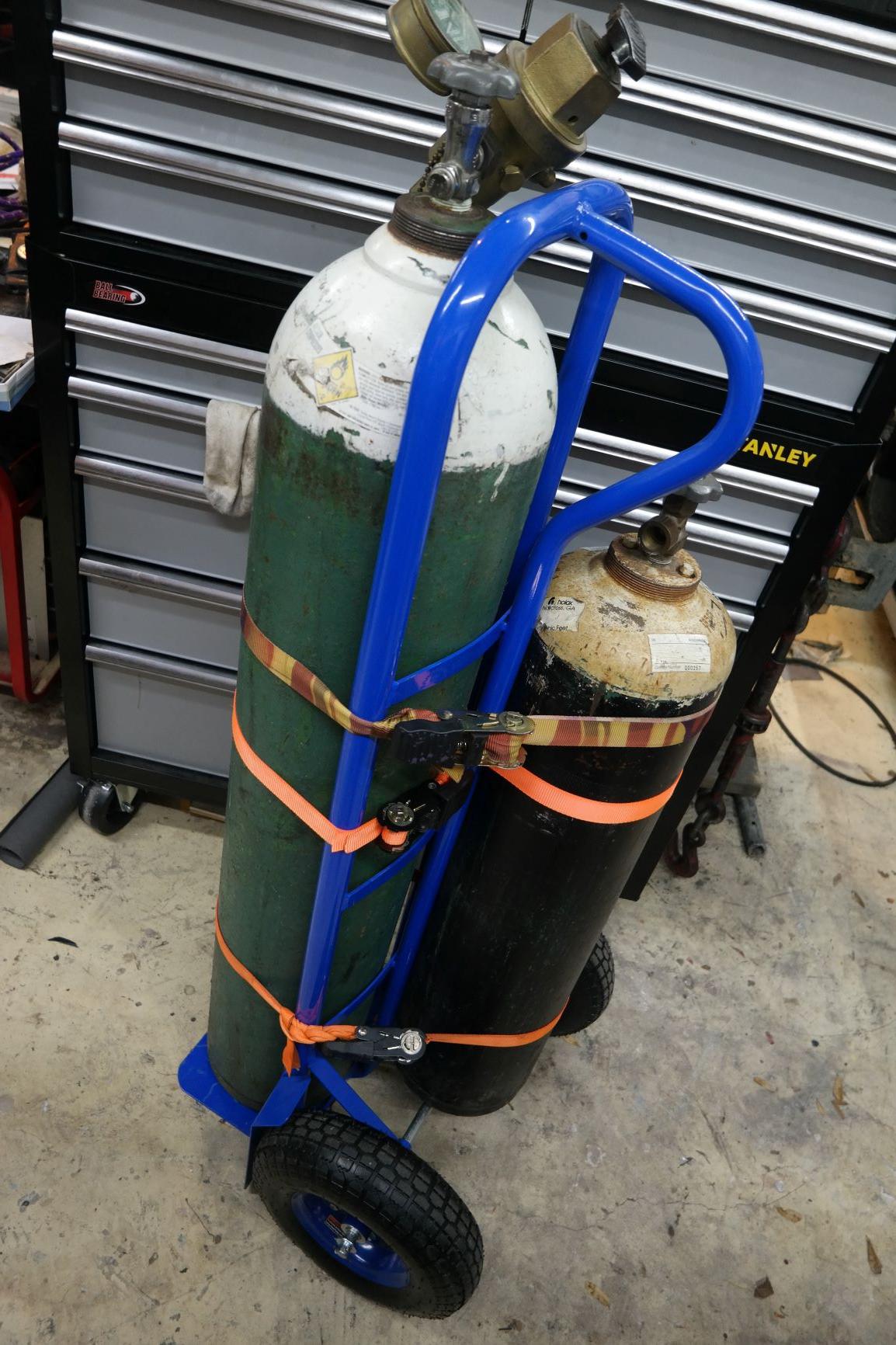 Feels like a couple hundred pounds for sure, balance is good, can pull backwards smoothly with loop on slab, no need to even lift the shoe.

Needs a gage cage and maybe some trimming.

3 straps are doubled and tied, don't hate. Chain your own, end of conversation.

Next week I'll have hoses, you NEED hoses if you're gonna be catchin stuff on fore! (intentional miss-spell, please pronounce it my way!) 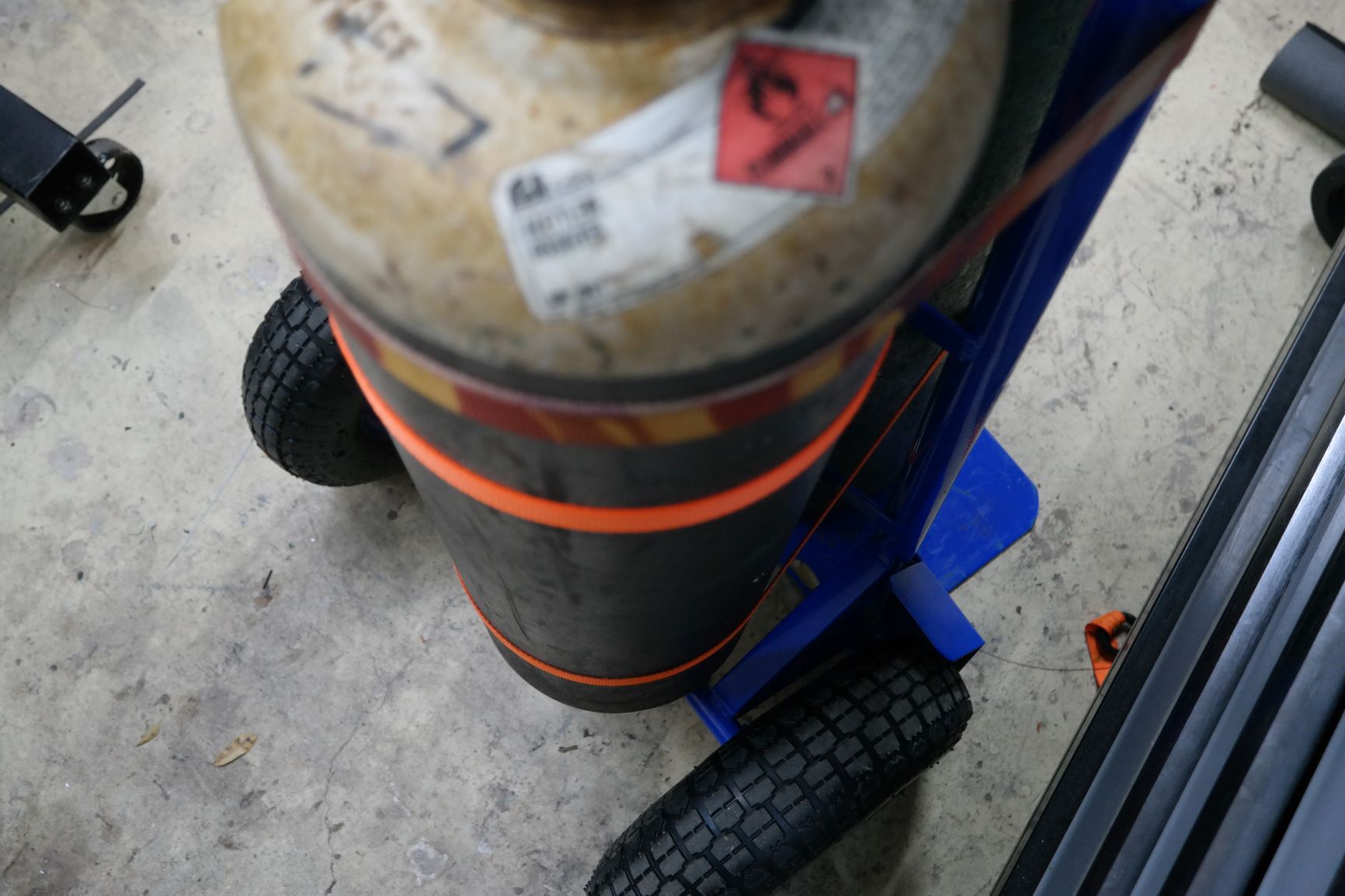 Maybe you should have given the guy a 30.00 gitar for the welder.

LOL I forgot about that part... Tom did eventually receive a guitar as payment,  but not the one he originally wanted. That one is locked in a case now.

He is an acoustic player, but had ogled a red/white chinese strat, my first guitar, the one  I'd started learning/practiced  luthiery on.

Guitars from China can be a lot like spring guns from China, all the parts are there, but substantial tuning or even re-work is needed.

I only had $25 and time into that unit, and it was ugly, but played AWESOME.

He's completely satisfied, and frankly I feel lucky to play guitar tech for someone so talented.

I can almost weld now.

My helmet window is too dark, or burns your eyes, and too small!

I NEED a better helmet, even if it's a vintage flippy type, so long as the window is bigger/better.

Dodge's V10 sounds like nothing else, and I don't mean in a good way!

Ford's V10 is balanced, sounds Indy-ish? I wouldn't own one, or any of their 3 valves. Just no.

The closest comparison is 2 ricers racing, or a really hot V6 with open exhaust. Neither are my style.

Open exhaust, or straight pipes, horrific.  Birds flew, horses and cows ran away, people came outside to see what the heck was coming down the street!

Turbo mufflers that would sound awesome on a 350sbc didn't stay on long enough to idle down. NO TAKE THEM OFF!!!!

I did some calculating (who said all that speaker box stuff was useless?) and opted to crossover (delta reflector interference cancellation) then run through D shaped pipes (slot port!), and blend again in a glasspack (acoustic damping for wavelengths under 1.5")

The wall thickness is important, no 2.5" glasspacks have 1.5" thick walls.

Here we have a pair of  2.5" pipes, being beat into a D shape. This was mostly freehand on the anvil.

Victory! No, I made a mistake here, and couldn't get enough angle on the mig gun.

End result was too much stick out and arc blow away from the spacer, towards the fresh exhaust pipe.

Live and learn (and pile some in there)

This was all done with the pipe standing inside the garage to hide from the wind.

I took a break to let the smoke clear, and texted this pic to an old welder.

His standard reply is an emoji,  that day he sent back "Why did you do the whole thing VERTICAL!?!?"

Uh... I didn't think a standing pipe was considered vertical... still not sure 'bout that... but the STOP-START is ugly as sin...

Weld done in the proper position, with a spotlight, and after getting accustomed to the materials.

The sound changes through the RPM range.

Yup ditch the flux core, add the co2 and keep the power cord as short as youcan

Don't mind the straps for mock up, had to check the balance.

With freshly aired tires it's smooth rolling and controllable but distinctly heavy, and not particularly rigid with the bottle still leaned at rest.

The machine is solid as a rock back there, I mig welded a shelf to the frame and braced it to the axle.

I intend to relieve the vertical tube frames and pull the handle towards the foot, and strap it there so the bottle is vertical at rest.

Bracing is a must, the vertical tube forming the handle has been partially removed to buy me 2" of depth. Meh...

Anyway, it's a mock up, let the mocking begin LOL. 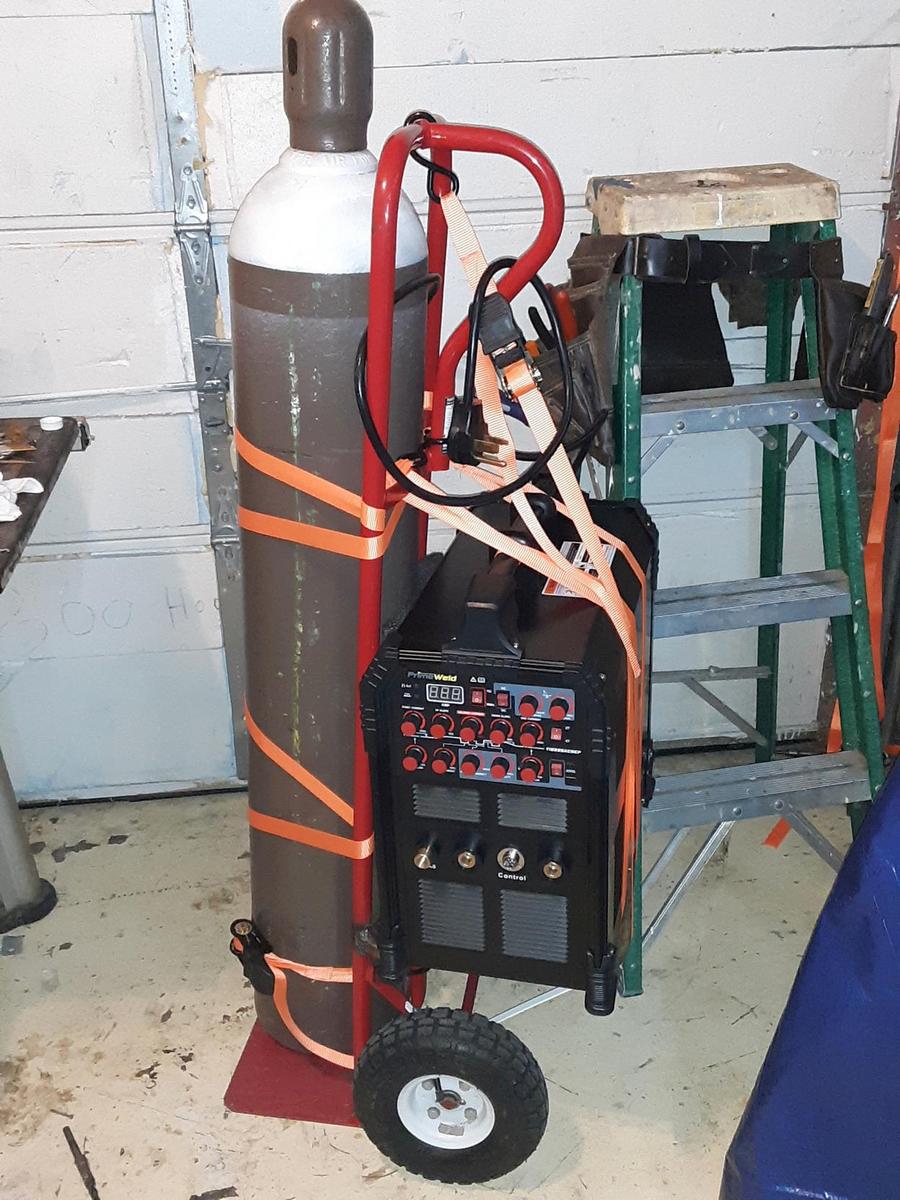 Welder shelf made from an piece of bar stool. 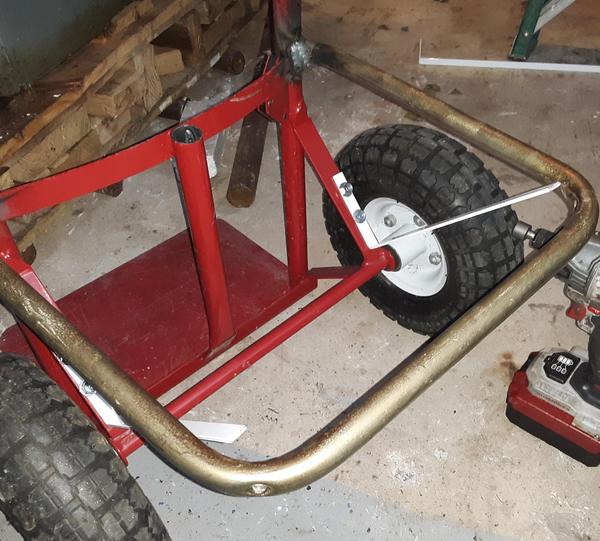 The foot is strapped on both sides of the bottle.

2 baskets on the top shelf, welder on the bottom shelf. 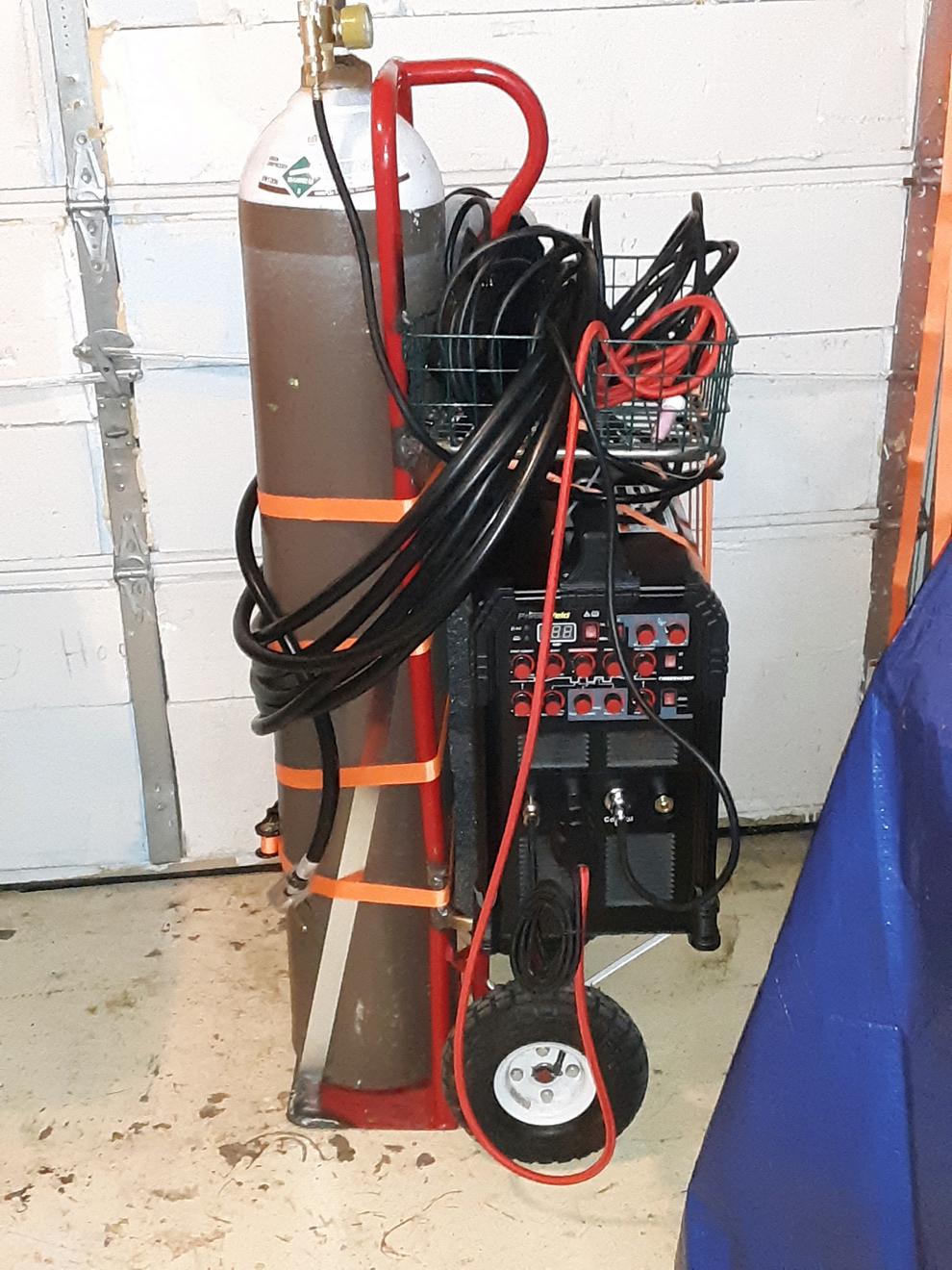 So far I've only balled a tungsten and electrocuted myself during HF start... nice... I ordered 15Lbs of 5/32 rod as punishment...

With all that I neglected to mention... it's a PrimeWeld 225 AC/DC TIG stick machine, 3 year warranty.

The mid-grade Chinese TIG market is occupied by several companies, most operated by relatives of the same family.

To be clear, PrimeWeld might be related, I gave up researching ... but they are East Coast at least, and word on the street is

Either way, East Coast shipping is better than Cali! Wow it cost $45 for an airgun from FL->Cali.

The sumbish gave me a bottle with 3 weeks of hydro left... I'm gonna use most of it up in the next couple weeks... starting with beer can bottoms...

I have same welder,  only played with it a few times so far.  got it because the HF for tig on my big Miller ( ac/d 250 Dialarc HF) went south.  Way cheaper than trying to fix Miller and uses way less juice being inverter based vs transformer and the auto 120/220 on the input saves a lot of hassels  when in the field. I have a ready welder spool gun that I use for mig work it is a little cumbersome with coil right there but works well for alum. tossed the primeweld in the escape last week to repair the mower deck at home. No way could I have done that with that 600lb behemoth dial arc.  Course I do not think I would want to try to burn 1/4" rod at 200 amp on it- that is where the dial arc shines. pick your poison for the job at hand.

I looked very hard at Red and Blue machines like Synchrowaves, Linde Heli-Arc, and all sorts of 70s-80s-90s industrial types.

Idle current on some of the transformers was higher than consumed amperage at 50% welding with the inverter, amazing.

All the old ladies bantering about transformers being easy to fix... well just take the panel off and you can see right away that they don't have a clue what's really in there.

Main objective here was welding aluminum, I've had slim success, most of the time has been spent figuring out what I'm doing wrong. Lots!

I finally stopped to wait for more tungsten to arrive from China.

One thing I know for sure, trying to weld beer can bottoms together makes a heck of a stink!

This week I'm putting control arms on a Expedition, that'll give me some nice sized castings to booger up.