Our 6th and final Match of the 2019 Season is complete. The early weather forecast was calling for late day rain….excellent! Well……Not so fast! The day before the match, the forecast changed and called for an all day chance of showers! Ok, match still on, let’s roll the dice. It was overcast with a light wind and just a couple of sprinkles. The temps for the day started in the low 40’s and ended in the mid 50’s.

As like last month, my wife Pat and I randomly placed the targets the day before. After setting the course, I used a rangefinder to get the distances. Upon returning back home, I ran the numbers and had set a 38.20 average yard course with a difficulty of 38.2T….oooppps! When we arrived at the range on match day, I adjusted a couple of targets in order to bring the difficulty down a little.

After a quick shooters meeting, it was game on! The stats for the 30 target, 60 shot match course ended up with a difficulty of 35.86T with an average yardage of 36.73 yards. There was 1 kneeling lane and 1 standing lane. Also, 13 of the 30 targets were beyond 40 yards. We had 3 cold lines. One was a false alarm, one was due to the key ring blocking the KZ and the other was a rat decided he didn’t like being up on the bank and started to work his way back down to level ground! Other than that, things went pretty smooth!

After the conclusion of the rifle match, Ray Apelles was surprised by a visit from his dad and sister, Hans and Rosalie! In fact we all were! They are missed on the lanes and it was GREAT seeing them! They were there to bring a Birthday cake to share with all of us to celebrate Ray’s Birthday! Yep……time to get all sugared up before the pistol match!! 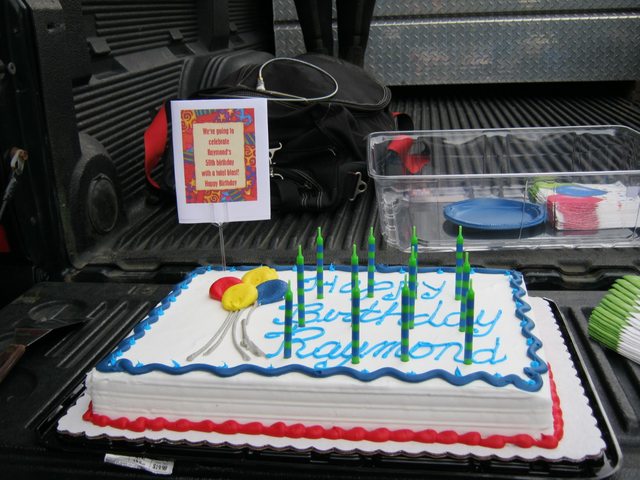 After our cake break, it was pistol match time! Well………..4 people shot pistol. Sean McDaniel and Glenn Thomas opted for Hunter while Leo Gonzales and Tom Hall opted for Hands only. 11 of us shot un-magnified rifles! Yep, a look below at the equipment list will show that! For quite a while, I have wanted people to shoot the pistol match with their 10M rifles. When we put our match announcement out last month, I started prepping our competitors for what was to come. This month, I laid down the course of fire. There would be 20 targets ranging from 10 yards to 35 yards and all would have black face plates with yellow full size KZ’s. I pulled out 20 brand new targets consisting of both Remington and Air Venturi. All the targets were tested and were going down with 2 fpe. This was gonna be fun! The only rule was all sights used were to be un-magnified and everyone was encouraged to keep the energy at 7 fpe or less. The stats for the pistol/10M match using the pistol spreadsheet from AAFTA was 20 targets with a difficult of 23.19T. The average yardage was 19.65 yards. Not sure what kind of difficulty factor should be added for un-magnified sights, so it was probably a little more difficult than it shows! To add to the difficulty level, John Eroh, decided to shoot all the targets standing with his open-sighted rifle!

Some of the pistol targets 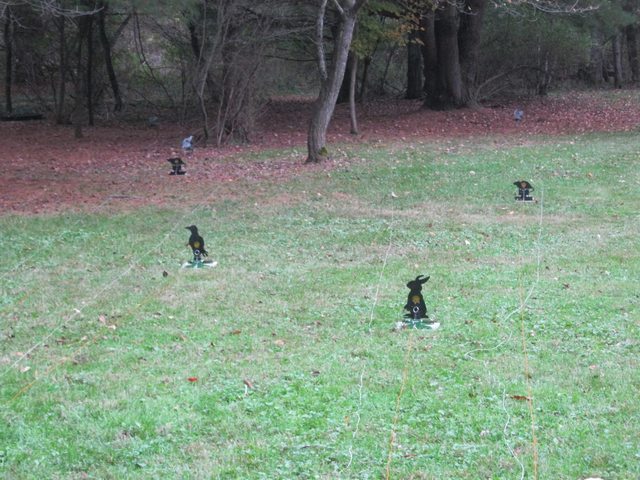 After the conclusion of the pistol/10M match, everyone jumped in and helped with teardown! Thank you all! In no time, all the targets were packed up and it was time to relax and chat about the day. I asked what everyone thought about the 10M match and if I should do it again…….it was pretty much a unanimous YES! The paint scheme will change and we’ll alternate between pistol 1 month and 10M the next. This will keep things fresh and add a little fun in the mix!

The Pictures from Saturday’s match can be seen here: https://imgur.com/a/vn6X4AF

Thanks for the match. Shout out to Leo for being my lane shooter. Great day for match and 10 meter rifle was a blast.

I had fun shooting your match. A special thank you to Sean for bringing and presenting me the 2019 AAFTA WFTF Piston Grand Prix award. I did not believe I won until I got the plaque confirming it. Hope to see you and others at Ray's NY State Match.

Always a fun time. Thanks Greg and Pat.