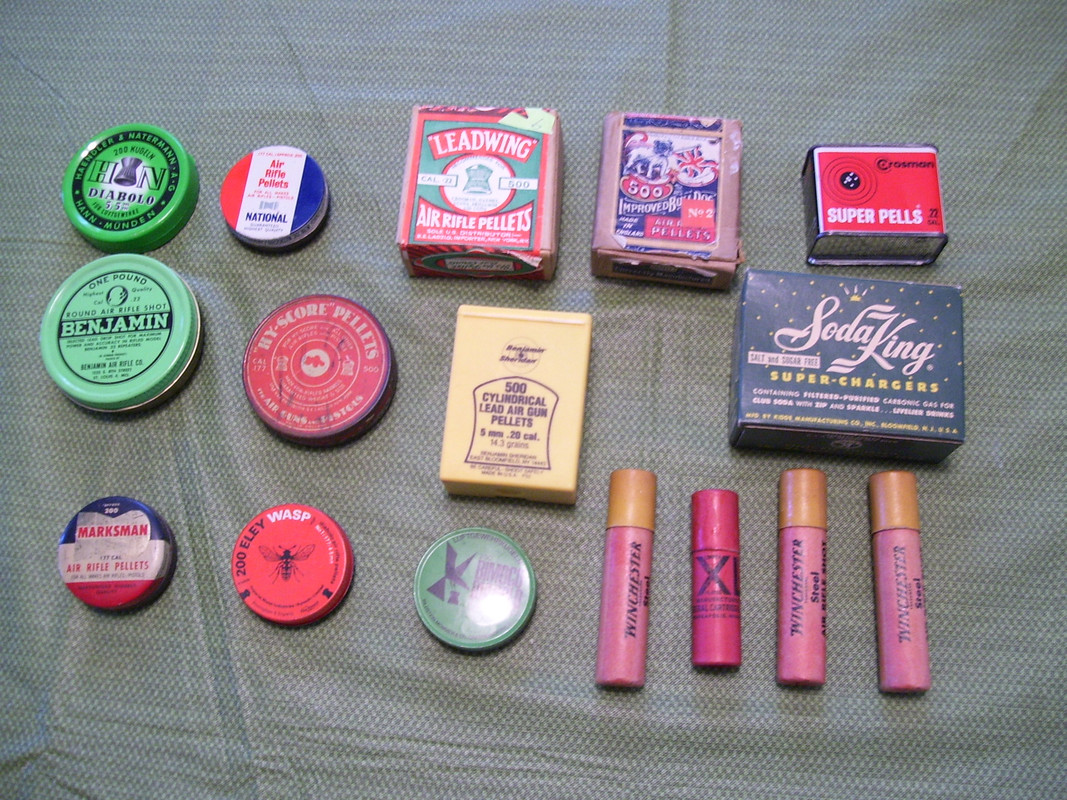 I remember most of them. Don't recall Leadwing, or the box to its right with the English jack. Don't remember ever seeing the Soda Kings. Not sure of the lower green tin...too much reflection. I seem to recall the Winchesters only I thought I remember them as BB's. Ok, one more I don't recall, the red white and blue Nationals.

I still have two tins of Benjamin Sheridan .20 caliber diabolos.

The National tin is made exactky the same as a UK pellet called Minutemen. These are my favorite tins. Both have very coarse threads and never get cross threaded. They also open and close with only about 10 degrees of rotation.

@straitflite The tubes are all bb's.

Went through tons of the benjamins growing up. Hi Oldwhizzer,
I remember some of them.

I used to use Soda King cartridges in my Benjamin 262 "Rocket" air pistol, but the box was different.

I remember Super Pells in the "spice can", but mostly never used them; they were too poorly made.

I have never owned Benjamin round balls, but used and still have several tins of green can pellets. The 500 count .22's are nice, but the later 250 count aren't.

I loved the Eley Wasp pellets and shot many tins of them.

I also love the Bulldog pellets and shot many tins of them but the one's I'm familiar with came in tins with twist off lids. A local store called "The Bargain Center" sold them in .22, 500ct. tins for $2.00. I still have a couple of tins.

I had a tin of "The Minuteman" pellets way back when that were mentioned above. Not well made, but had a cool tin. Precise Import Corp.(PIC)imported them and also the little Slavia air rifles, and some Gamo's, for instance the model 68.

Thanks for the trip down memory lane, and thanks for answering my pellet question over on the Daisy Forum!

@jmars- Jeff, My first air rifle was a Kessler 22 cal. our local hardware store carried Bulldog pellets in a tan colored tin with a screw on top as you described and that's what i used , back around 1952. [yep! im old!

Went thru a bunch of the Benjamin Sheridan 5mm pellets in my Sheridan. Shot so many birds around my house we didn't have any there for at least 2 years after. lol