For some time now I've been trying to have the flexibility of having a good backstop at a great price.

Initially, I thought this was a good concept:

However, when sighting in guns I need more room than 7" in diameter.  My targets are much wider too.

I then tried a backstop bought from home depot.  Particle board, even at 1.5", does not do a good job.  Forget it with multiple shots going through same hole.

Then I started shooting over 50ft. lb. guns.  Had to think of something better.

I looked over at the massive woodpile I split several months earlier, and had an idea.

Golden rule:  **First make sure your neighbor(s) are cool with shooting in your backyard!**  You cannot proceed without this requirement.  108.9dB report from a Wolverine HP:  My neighbor could hear the report from this gun in his front yard.

1.  Pick a nice cardboard box.  Fill it with magazines and paper from USPS junk mail.  No cost.

2.  Buy some nice sight in targets:

4.  You will need split large rounds to get the thickness required throughout.  Stagger the wood if need be.

Fill your box with rubber landscape mulch and burn the wood.

What I do in my back yard is my business. As long as I'm not breaking laws neighbors can suck it.

I built a back stop out of a prefab medicine cabinet with the doors removed and a few pounds of that clay like material they sell at Home Depot to seal electrical boxes with. Same stuff Beeman used to sell for silent pellet traps. A single layer (about 1.2 inches) works fine at 20 yards up to around 1000 fps with heavy .177. Any closer and there really needs to be a thicker layer. Now that I have a 65 yard outdoor range in the back yard I don't use it much but I keep it just in case.

Old jeans folded up, work well and I hear plastic bags work well too,I have not tried the bags myself.,kelly If you're using that wood for firewood, you don't want to be contaminating it with lead that will vaporize when you burn it.

Here's a trap that will easily stop 100 FPE guns. If you want to make it really bombproof, get a piece of steel plate and put it in the bottom. Total cost less than a piece of 3/4" anything. A friend of mine just built one for a 45 FPE gun, and he says "12 gal. tote and two bags of rubber mulch fit perfectly unopened."

I screwed up on my first powerful PCP.

Being in a hurry to try it outand not knowing the real power, relied on the old back stop for testing.

NOT a good idea.

Shot though the back stop...thought the back wall of the shed...though the wood fence...and into the neighbors yard. Lucky it hit a tree and not him or his property.

Also learned that even a double stack of bricks would fail if shooting nice tight groups (hammering away in the same spot).

You really only get once chance to screw up neighbor-relations...after which,anything that happens (even if it wasn't you) gets pinned on you.

A container and 12"-14" of rubber tire multch will stop it...used a square plastic wast basket..it redistrubites itself,so not problem with hammering in the same spot....and taping on a thin layer of foam rubber on the front (to mount the target paper) takes care of most of the impact noise.

Eventually you'll have to duct tape over the shot up part of the plastic basket.

Being lazy...can leave it outside (with the target removed) and lean a leaf rake against it,and the neighbores don't think twice about it being out there.

You may take the "hell with them" attitude....but if it comes to the law,if you're too loud or even just POSSIBLY endangering their property...you'll lose if they press it. Basically become the local PD's "usual suspect" for anything in the area, from a shot street light to a dead pet.

I'll agree with Ribs on this one . A poor atitude to with can only end poorly. I'm of the thought I can catch more with a teaspoon of sugar than a whole handful of salt.We, as a group don't really want to start a fight. I'm 77 and this mind set has gotten me along all through life.I hunt and shoot like no tomorrow but I also like  to keep a slightly lower profile. I made this from new carpet off-cuts I got from flooring shop dumpster. It's quite. 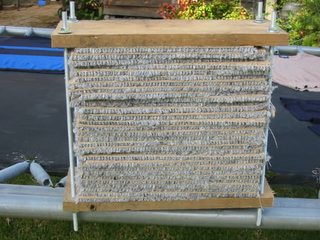 If you're using that wood for firewood, you don't want to be contaminating it with lead that will vaporize when you burn it.

Here's a trap that will easily stop 100 FPE guns. If you want to make it really bombproof, get a piece of steel plate and put it in the bottom. Total cost less than a piece of 3/4" anything. A friend of mine just built one for a 45 FPE gun, and he says "12 gal. tote and two bags of rubber mulch fit perfectly unopened."

This is great! Love it.

I made a duct seal target years ago using a deep metal cooking pan that my mother had given me.

It collected a lot of pellets over the years, and it got really heavy !

A couple of years ago I picked all the pellets out of it while while watching TV... tedious, but I still sometimes use it.

I now mainly use a cardboard box packed full of old rags and clothes.

I save the empty cardboard cereal boxes to replace the front of the cardboard target box, periodically by just taping them to the front.

You can shake out the pellets fairly easily and re-pack the rags back in if you want or add more.

I need to shoot more... the empty cereal boxes, although flattened, are piling up !