PCP's don't have much kick so either will do but my question is what do you prefer?  Do you like being a bit further back from your scope like the 6 inch provides? or in closer to the scope?  What are your experiences? preferences? Ty Average 3" or so unless shooting my pistol with scope at 15" relief.

Stocks are all shaped differently.

If you're asking, no, I've never been hit by a scope.

My H135 has drawn the blood of random passers by, but it was their own fault.

Which scope has a 6" eye relief?

Now, if we're talking about this gun, then 6" would be hard to achieve in any normal shooting position, unless you found some hokey way of moving the scope forward 3". 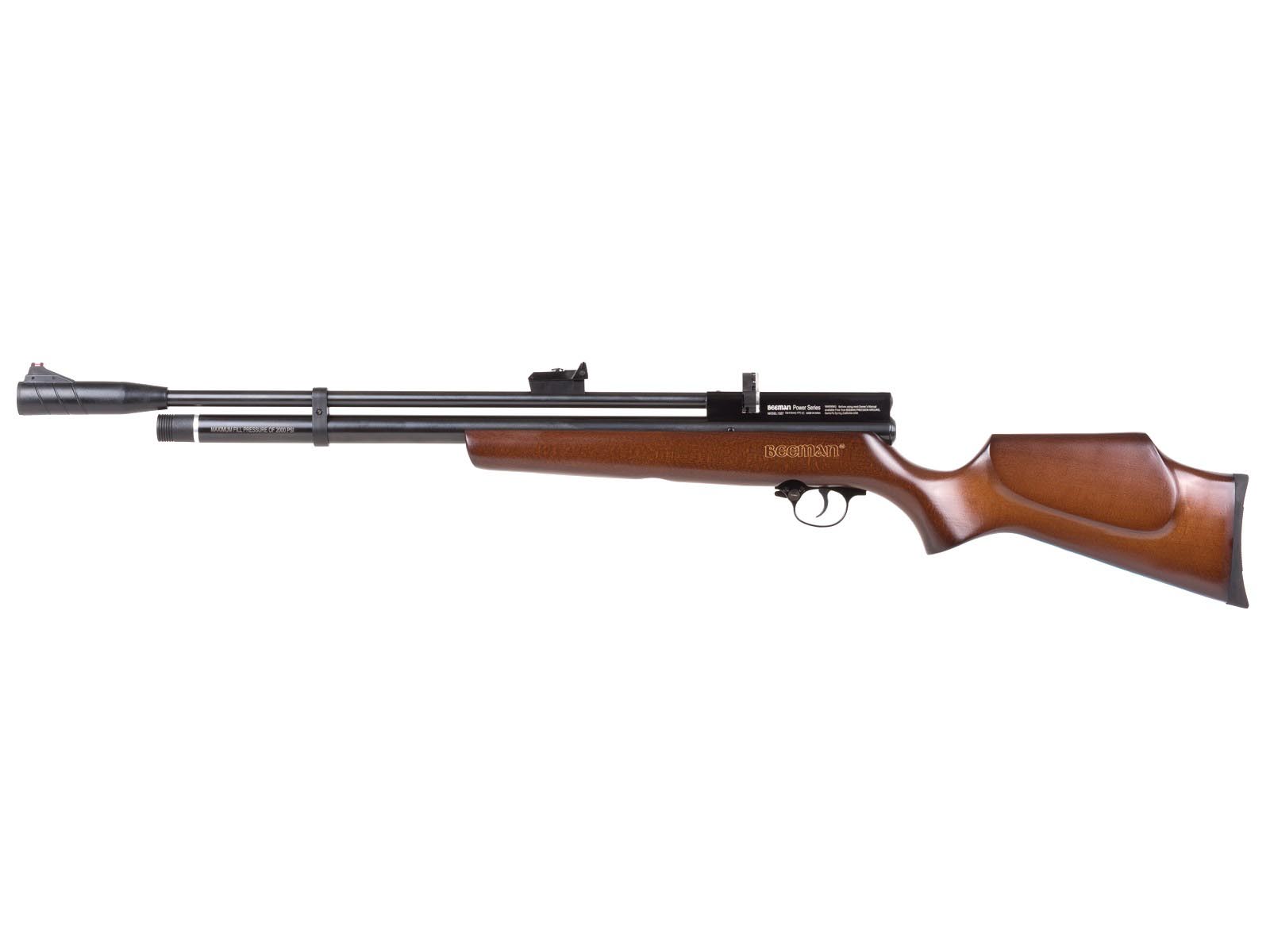 scout scopes give the 6 inches or more you mention Stocks are all shaped differently.

If you're asking, no, I've never been hit by a scope.

My H135 has drawn the blood of random passers by, but it was their own fault.

Which scope has a 6" eye relief?

Now, if we're talking about this gun, then 6" would be hard to achieve in any normal shooting position, unless you found some hokey way of moving the scope forward 3". "Now, if we're talking about this gun, then 6" would be hard to achieve in any normal shooting position, unless you found some hokey way of moving the scope forward 3"."

I agree with GWH. Normal scope mounts won't work with that, and I don't see any advantage to 3 more inches of eye relief. On some guns like the Sheridan, there are few other good ways to mount a scope.

+1 on the 3"+/- eye relief. I also shoot pb rifle caliber pistols with 3" relief scopes, requires practice and technique, but I feel it improves my view of the target. I've never been 'bitten' by an air pistol mounted scope but a few pb's have nailed me.

Mounting can be a problem, there are a few 11mm one piece mounts available for 1" tubes, some with offset. I haven't found any for a 30mm tube yet. You can use adapters to 1913 rail and use a pb mount, but that's a lot of parts. Arguably, longer eye relief, or "scout" style as Cooper coined it, would require lower magnification. The trend as I am seeing it for air gunning is more and more magnification for more pellets through one hole.

That said, maybe it's just me, but I find that getting a "normal" 3 inch scope close enough for best viewing is actually quite difficult. Every product, rails, rings etc. seem gear towards moving things farther away, and yet my brand new Hawk scope claiming 3" is nothing of the sort, it's barely 2" at max zoom. This means that to get optimal view, I had to mount this scope (and essentially every scope I have ever mounted, with few exceptions) as far to the rear as every aspect of the mount would allow. I'd love another real inch or so to play with 🙂

I used a handgun scope, wasn't impressed with the setup or scope.

My question regarding mounting a scope three additional inches forward, was a pot-shot at some of the goofy cantilever mounts in circulation.

It occurs to me now, that I've read Cooper's works extensively, yet remember nothing of his rationalization for this forward mounting.

It was about speed vs. precision. Think of forward mounted acogs on ARs. Or the bead sight on a shotgun. The idea was just a shorter faster to point rifle vs. what is used for target or most long range hunting.  When I think of a rifle with a long scope, it's always someone relatively relaxed taking there time with the shot, be it at a bench, or even in a hide in Afghanistan. The scope scout rifle was meant to be used like iron sights or the red dots we use now, low magnification, faster to point. With all the reflex sights and ARs in use now, I don't know if any of Cooper's theories on the efficacy still hold any value. I don't want to introduce politics, but I don't think Cooper thought we'd all have ARs. This was his normal citizens version.

@cyberdynesystems I think you're probably right about the speed vs. precision concept. On the other hand, Cooper didn't foresee red-dots and reflex sights when he postulated the scout-rifle concept. They pretty much eliminate the need for a long eye-relief scope .

I've used several of the cantilever one-piece mounts and found most to be quite useable and right now have one on a scoped 1377 project. Even the cheap chicom mounts are useable and with a one piece, lapping is usually quick and minimal, and there is no other alignment needed. I prefer them and use one piece mounts whenever I can.

On the other hand, Cooper didn't foresee red-dots and reflex sights when he postulated the scout-rifle concept. They pretty much eliminate the need for a long eye-relief scope .

Optics have come a long way in the last 40 years, when I was introduced to shooting in the 80s, there was not a dot to be found.

Most of the deer rifles had a 3-9x40, never saw AO, except a lawyer who came to camp.

Cooper likely also did not for see the improvements in ARs.

you know what... I'm in the wrong thread... https://airgunwarriors.com/community/the-fifth-shot/the-lightest-ar15-youve-never-seen-built-not-bought 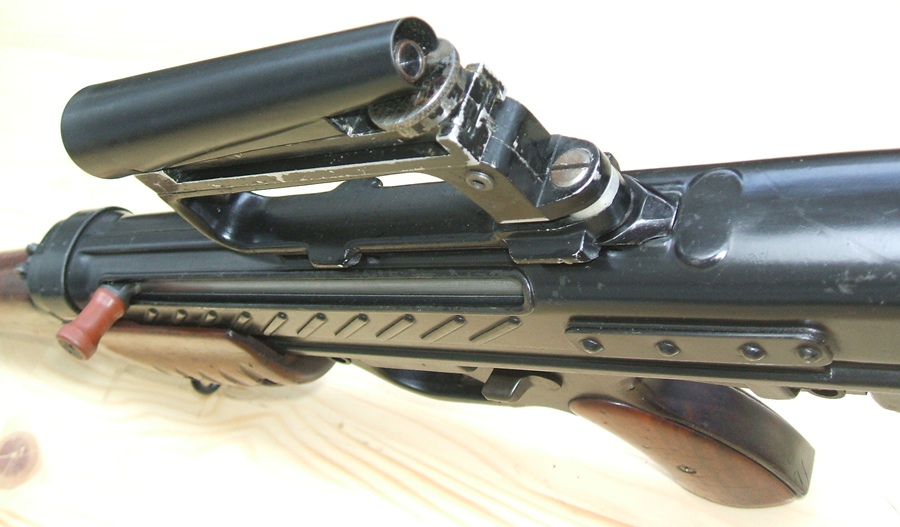 If you just have to have more than 3” of ER, consider one of the new Gen2 Hawke Sidewinders. I have one I use in FT and it has a 4” ER and a full eye box (no black halo) which also greatly reduces potential parallax error. You really need to look through it to be fully appreciated.

This article appears to have survived the transition to digital. 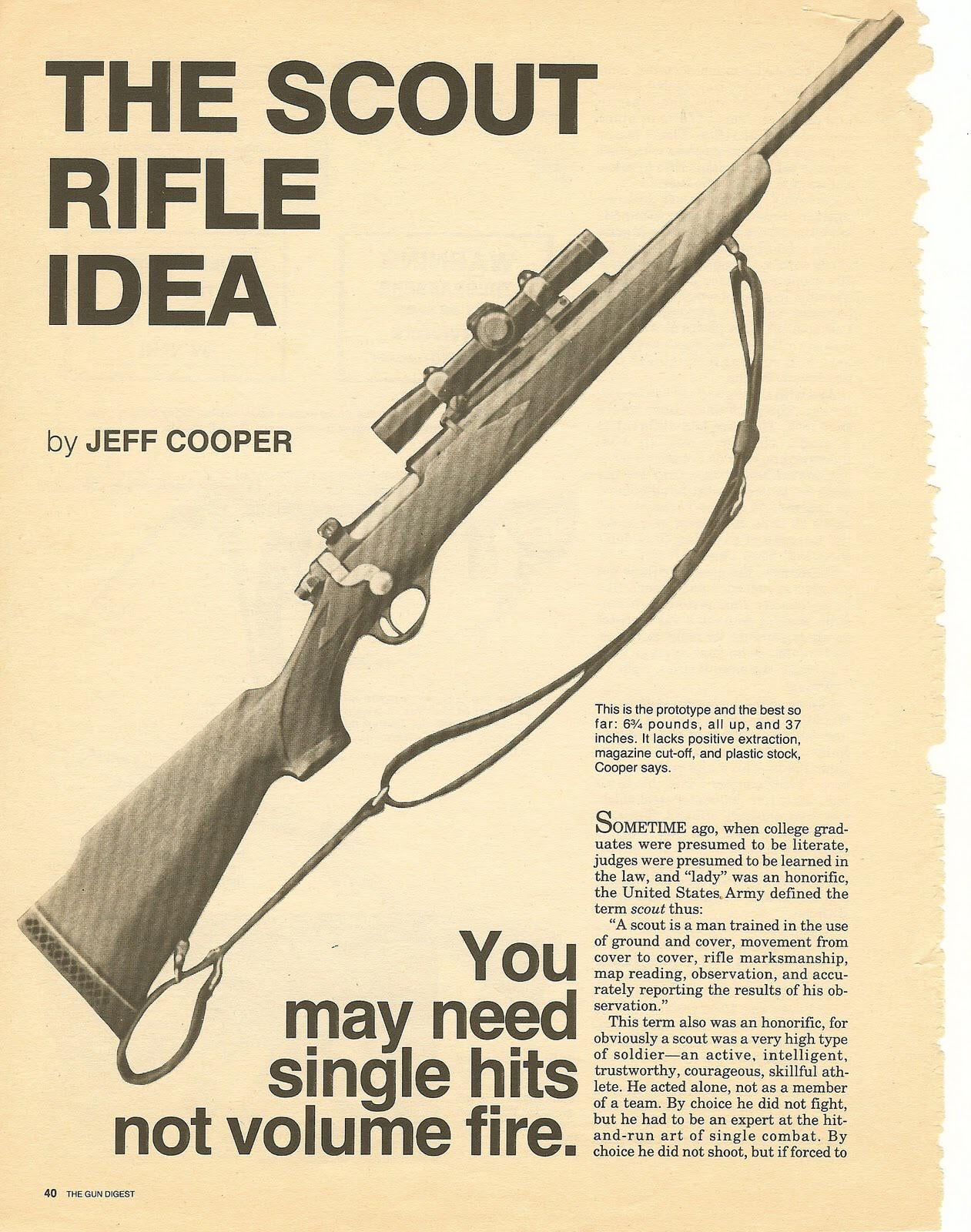 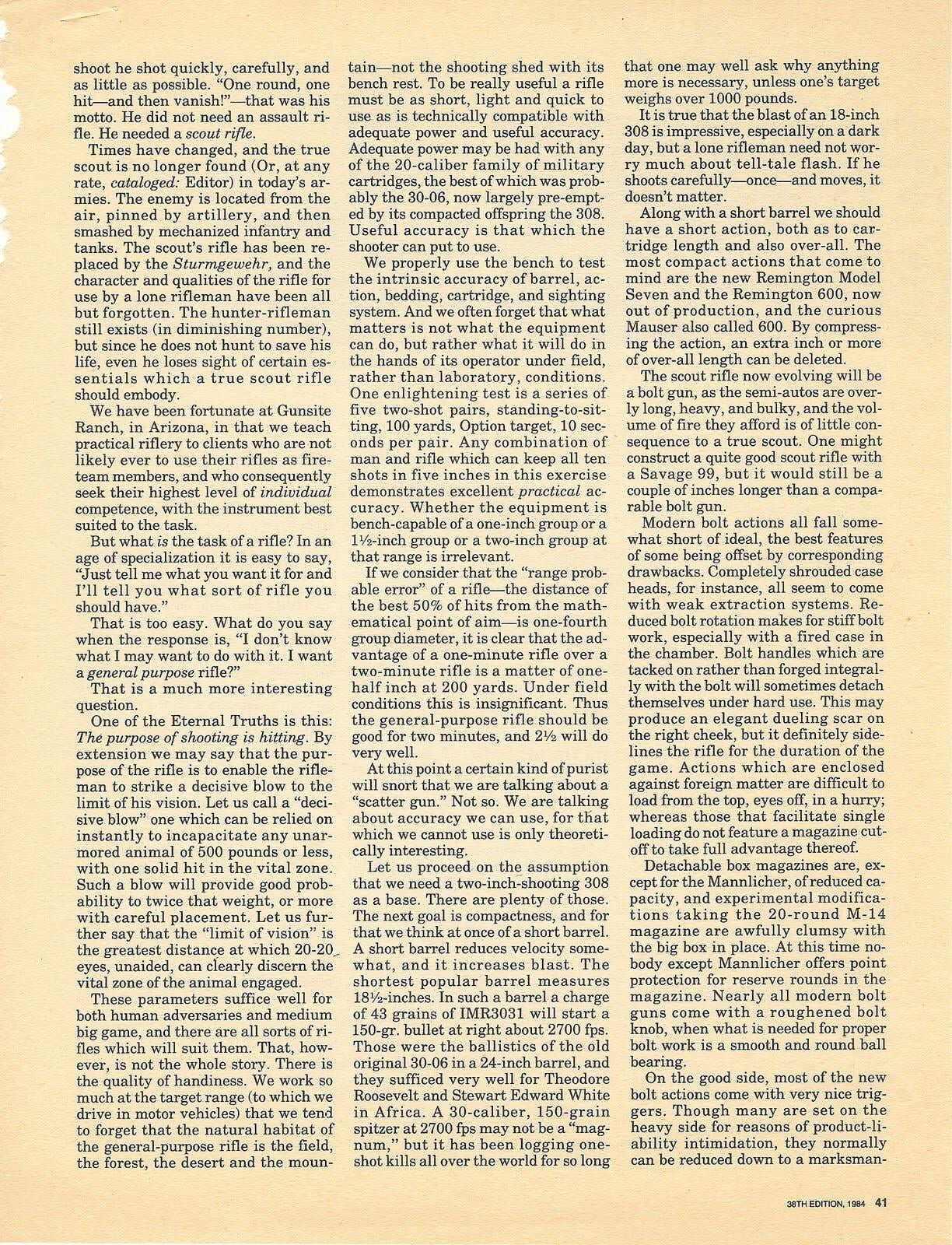 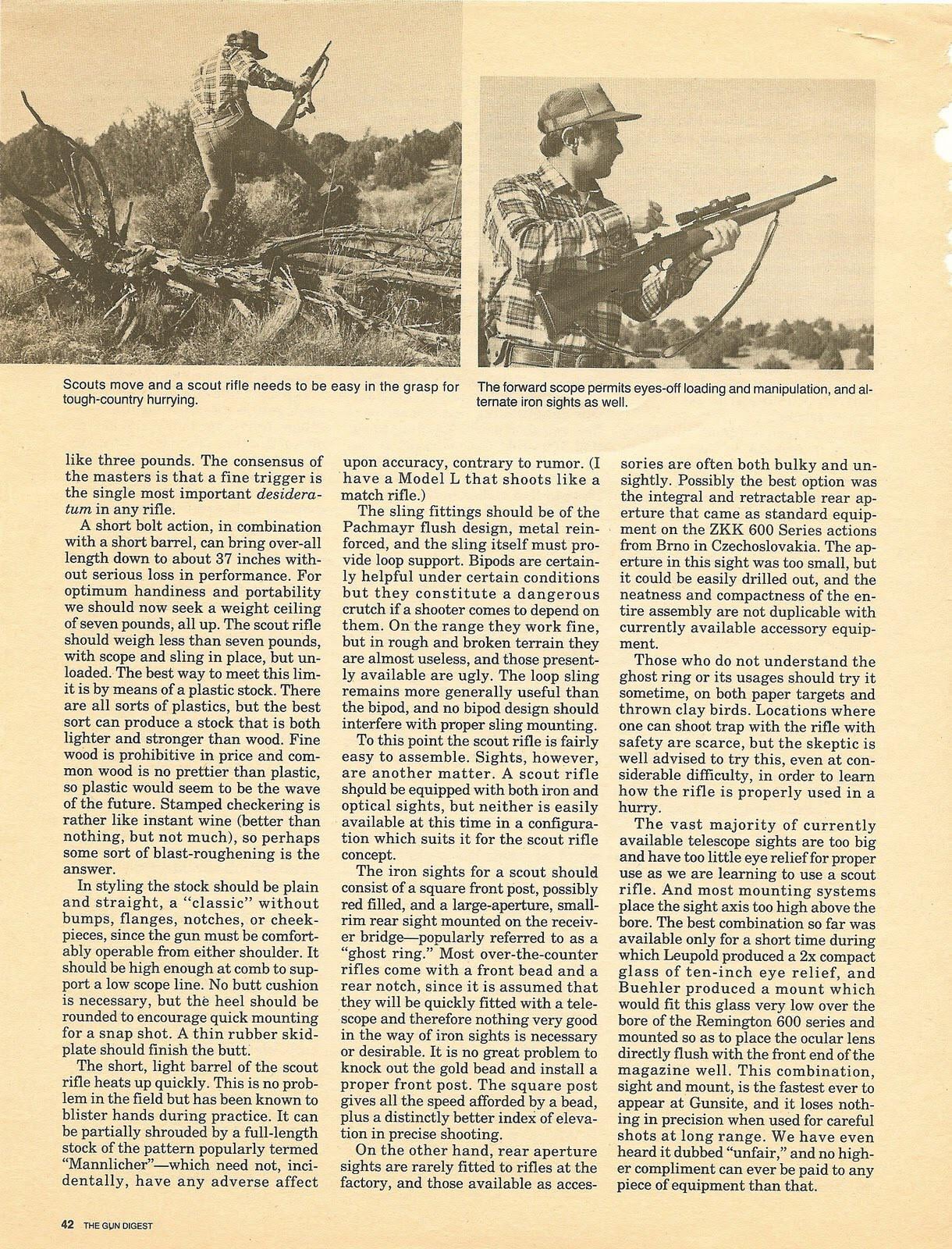 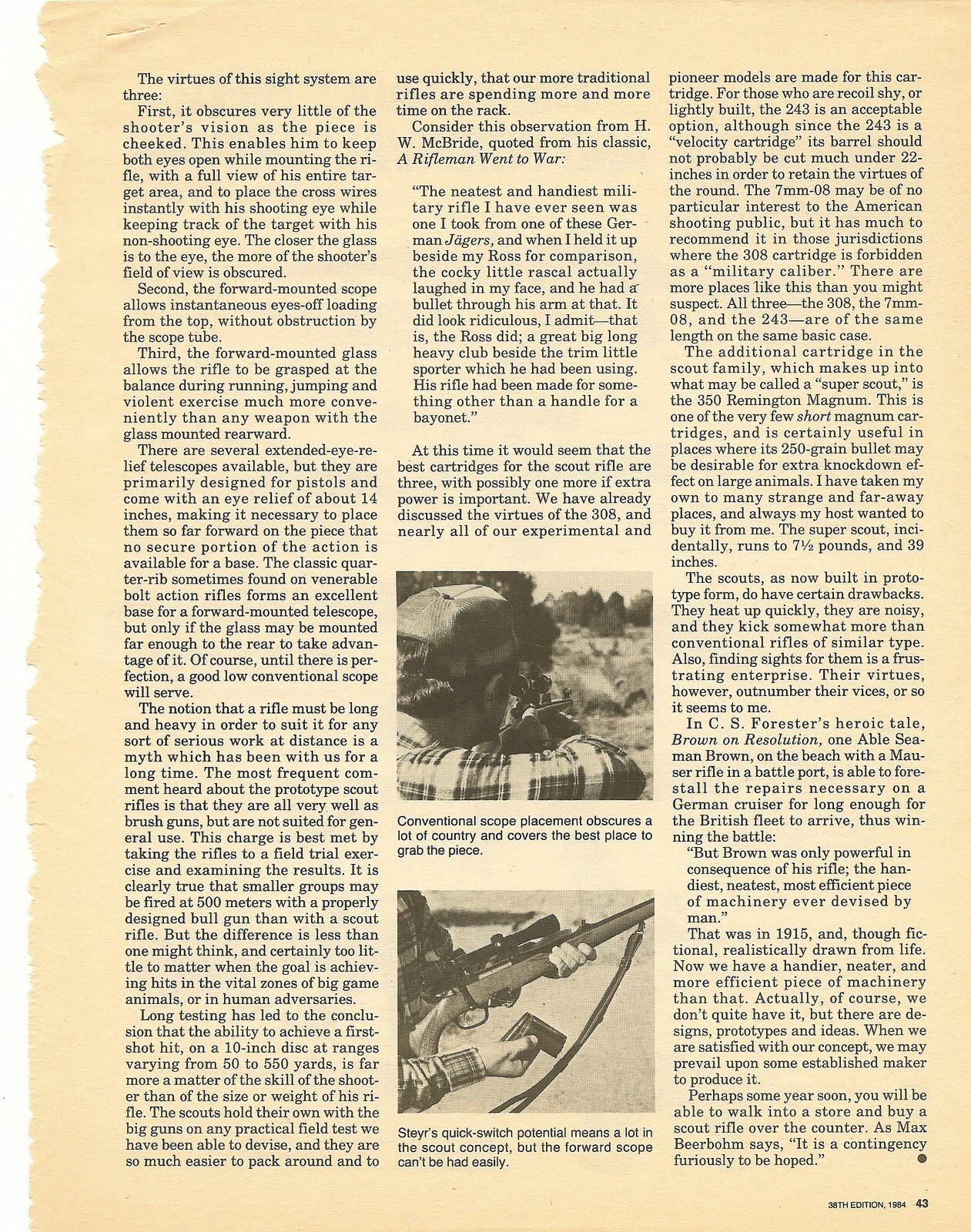 Nice finding that old article! thanks for posting.

As my now OT issue with eye relief, it turns out it's really mostly my one scope that is of concern. My Hawke, is giving less than 2" of eye relief. I was having a bear of a time getting it mounted so I did not have to lean into it on my R9. I was about to give up on that combo one I read about the Diana Zero Recoil mount, which in addition to helping with springer recoil damage to scopes, it happens to push the scope TOWARDS you instead of further forward like every other mount I am looking at. Got it all set to go and it has allowed me to finally get the proper eye relief on the R9. Now I just need the rain to stock to see if it actually will hold zero with this gimcrack contraption!

Latest Post: Learn the M3 in under 5 minutes (How to Tune the FX Impact) Our newest member: Antoni Recent Posts Unread Posts Tags