Loving my new CZ T200, but I would use my Disco for pesting anything larger than a squirrel under 20 yards. 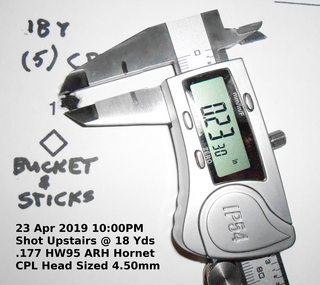 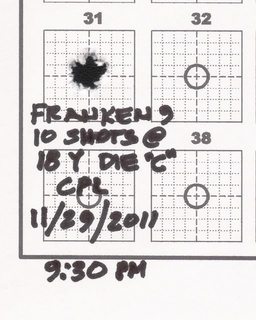 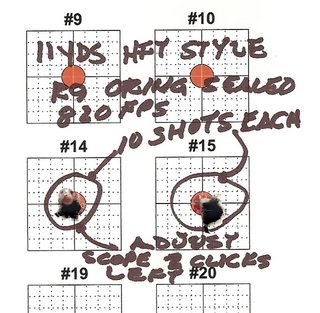 Do like springers...and are accurate once you get to know them well.

But I still can't get a lot of shots in a row without at least one flier. HAve manages some great 4X5 shot groups.....but normally it's like 19 good shots and an "oops".

May not want to shoot 60 shots and count every one.....but the title of this includes 10meter,which would kind of include a lot of shots including the fliers.... tend to go with PCP's.

ONCE (only once) sat down and shot 205 shots (41 5-shot groups) in a row with an inexpensive PCP rifle (one fill for that particular rifle).

Even the worst group wasn't bad...the same slip in technique in a PCP has a much smaller penalty.

Really not intuitive how to get pictures to post on this site....but I'll try again with a direct link:

and then you don't mention what pests you are hunting for

a Hammerli 850 could work, needs a little trigger work

All else fails to provide a good time for me. I have to deal with the shakes of old age. So knowing that the rifle when matched with the right pellets will repeat and repeat and repeat is the world for me. If I miss (and that happens a lot) I know it was me and also know that about every 10th time out shooting I'm spot on and in the zone. It is intoxicating 😇 The closest thing to getting high since my youth.

So if you have to pick one over the other, it has to be which is more important to yourself. I guess that's the long way to say it.

I'm lucky right now. I have the Disco for long range target shooting and pesting. Then I have the T200 for shorter range target shooting. And lastly an 850 in .22 for plinking and tree rat smacking. And man it swats a squirrel pretty good. Almost forgot the Titan, 2400kt and my old very 1st rifle, the 114. I sold the rest and still should sell the 850.... What did I say? I'd still be lucky without it though. It's a fun rifle but not really my thing right now.

Sorry for the long post. Lot on my mind I guess?

I'll also ask what kind of pests are you talking about?

All of the guns you mention are good shooters, and will meet your accuracy requirements. Since you're new here, if you go with a PCP gun, you will also need an air source. Hand pumping a bottle gun like the Gauntlet can be real exercise.

What range, and size of critter, are involved in your "pesting" work? As marflow pointed out, that would diverge from 10 meter shooting at a certain point. A typical 10-meter gun is .177 caliber and in the 600 FPS neighborhood, which would make a fine 20-yard starling or mouse gun, but not a 50-yard squirrel rifle.

Your choice of 10-meter gun depends on how serious you want to be. A well-sorted R7 with an aperture sight, an older recoiling target rifle like an HW 55 or Walther LG 55, or an inexpensive Daisy single-stroke pneumatic can be pretty competitive. A modern match rifle such as the FWB you mentioned is better of course, but also vastly pricier. Unless you are planning on competing at a pretty high level, I would stick to a self-contained (spring-piston or single-stroke pneumatic) power plant. As already mentioned, a PCP takes supporting equipment which to me would not be very fun for your first "serious" air rifle.

Sights are also a consideration. Magnifying sights of any kind are not allowed in most formal 10-meter competition - you would typically use an aperture sight (as seen in my avatar pic). For head shots on small animals you want every advantage to accuracy, which for most folks means a scope.

Finally, think about size and weight. Match rifles are typically bulky and heavy - which may be fine if your pesting is done from a rest or close to your house. A smaller, lighter rifle is desirable if you are carrying it any distance.

Get yourself a Daisy 753.  Single stroke pneumatic, one pump, one shot.  Phenomenal 10M accuracy,  enough power to take squirrels at 10-15 yds with headshots, which is possible, given the aforementioned accuracy.

I've owned MANY 10M classic target guns, and the Daisy 753 has out-shot them all.

Now you have the equivalent of a "Hulk-Sized" FWB300. It will shoot right along many match guns with the right pellets (RWS SuperMag, or JSB S-100) and has the power to deal with most backyard pests out to 35-40 yards.

If ever you want to shoot with regulation target sights, a Williams FP/TK rear and the proper flat base/korntunnel in the front and you comply with regulations (except for power).

No need for a PCP.

Noticed something about getting a new Diana 54 currently?

HAve been looking at beat up ones/used,nasty looking....but are going to get a low power rebuild anyway.

Who has them new in stock ready to ship?

I have got to admit looking at the 54 more than once over the years. Every time it came down to that it is a beast if you don't detune it... I tried higher power Springers in the past, but even with the 54 sled I have been skeptical. So without detuning yourself, you then have to find a tuner with experience in the 54 and pony up the bucks to have it done right or what's the sense. Back to a 1K shooter, minimum! Ouch...

@ Ribbonstone.- The new AirKing Pro's will be hitting US coasts within the next 2 weeks. And they should go for pretty much the standard price. Current scarcity is just the result of a model change. With a correctly specced Maccari Spring you are looking at around 10 ft-lbs yield and about 30# PCF (Peak Cocking Force). Yes you need a custom guide and TopHat. IF this is enough for the OP's purposes it's about $800 all in with the proper custom work.

Whatever you buy you will need to scope, and if a PCP, then you need to buy the pump (unless you already have other PCP's and then the OP would not have much basis). AND pump. Of course you can buy a compressor, and a Stormrider with the Altaros regulator for about $800, and you can install the regulator and tune it down to whatever power level you need. You will still need a scope and rings. It will take some barrel work and the installation and refinement of the powerplant, but that is not beyond most advanced tinkerers capabilities.

So, there are several possbilities.

@hector-j-medina-g   Any pics ? Oh and if I may, what ever happened to those CZ 200 with the Altoros upgrades ?

There is an option in Beech, and POSSIBLY (under special order), Walnut.

You can read more here:  https://www.ctcustomairguns.com/hectors-airgun-blog/the-hpm-or-dianas-high-performance-muzzleweight

Guns will come with the traditional front end muzzle piece and sights, the HPM (tunable muzzleweight) will come in the box, but uninstalled.

As Far as I know, they all sold rather fast.

When Altaros tried to get another batch made was when CZ told us that, apart from the orders by AA of the S200, they would be getting out of the airgun business.

Whether that is true, or they were simply telling Altaros that they wanted orders in the range of hundreds of guns, we will know when life resumes its normal pace (post CoViD-19).

Buy the AA CZ S200 with a spare cylinder so you have both swappable 6fpe and 12fpe power. Simple two guns in one!

I have this very same convient easy peasy swappable air tube set up. Can unscrew under pressure no problem.

Actually have 2 guns like this with dual power air tubes.

Ones a real beater field trunk gun and the other is a stay at homer.

Not really sure how well a 54 would react to down tuning to something more reasonable for 10 meter shooting........haven't really read about down tunes to that level (that's NOT something buyers of thosehave a lot of interrest in doing).

HAven't tried. Have two AA200PCP's (an "S" and a "T"), not regulated,have swapped tubes,and they run surprisingly even.....the only adjustments are in the rifle itself....so would have to make one low pressure by regulation to see any real difference.

10 meter rifles are not necessarily more accurate but they are specifically designed to shoot well at 10 meters.  They are just lovely to shoot in that game.  Other guns are more powerful, shoot well and kill stuff well but are not 10 meter guns.  NO rifle is best for everything.  That's just how it is.  You don't have to have just one rifle but if that is your goal figure out what you will shoot the most and get what is best for that.

Not really sure how well a 54 would react to down tuning to something more reasonable for 10 meter shooting........haven't really read about down tunes to that level (that's NOT something buyers of thosehave a lot of interrest in doing).

HAven't tried. Have two AA200PCP's (an "S" and a "T"), not regulated,have swapped tubes,and they run surprisingly even.....the only adjustments are in the rifle itself....so would have to make one low pressure by regulation to see any real difference.

Unless your club has a limit on power, most modern guns will shoot almost as well as Match guns at WFTF levels (12 ft-lbs and slightly under). And that is easily done short-stroking the 54.

SOME guns will even do that at 15 ft-lbs.

Again, it's not a question of the gun chassis, but the engine, and the control (you).

At DIWLA/WAC we have FT shoots and Monday Night shoots at 10 meters. You can shoot any gun you want because we have two kinds of backstops: one for sub 7 ft-lbs guns, and another for sub 30 ft-lbs guns. It's all in the fun.

Though you are encouraged to shoot match targets and post your scores, it is not mandatory. I often shoot silhouette cards, or a special target I designed to simulate the hardest offhand shots in FT.

Match guns are easier to shoot offhand, but that does not mean that you cannot have a sporter gun and still do reasonably well (80-85%)if you practice enough and know your gun.

In the end, it's about having fun and learning things about your guns and about yourself.

To illustrate the point, these are 10 shot groups with an LGV at 15 ft-lbs shot from the FT position at 10 meters, do note the QYS group:

Wish I could shoot that well offhand, LOL! For my $. 02, I've won the local 10 meter indoor annual competition with a used CZ 200 the past 4 years in a row- when we shut the season down in March, I was leading the overall standings for my 5th year .

Its the rifle, not me. Anyone who picks it up and shoots for record improves their results from the first shot.

I do have an (uninstalled) Huma reg- I like that I can shoot it at 7 ftlbs for indoor and then adjust it up to 13 ft lbs for hunting. It'll do a 3/4" group at 50 yards off of sticks, ifn there isn't much wind. Trigger is adjusted to scary light and its very rugged, handy and quiet w its pickle. I'm taking it out rat shooting tonight w a red light on top. It'll push a 10.3 pellet completely through a squirrels head at 50 and it'll perforate them completely through the chest at 80 yards. Brilliant rifle.